The XM1 is a tier 6 Premium Main Battle Tank originating from the United States. It can be purchased from Sophie Wölfli for 3,250 Gold. The XM1 was originally a tier 6 progression vehicle that was replaced by the M1 Abrams in Balance 2.0.

With good armor, high mobility, and a decent gun, the XM1 is a jack of all trades MBT capable of pushing a flank, brawling, or going hull down effectively. An excellent 0-32 kph acceleration and top speed allow it to maneuver much more rapidly than other tier 6 tanks, and while the 105mm may not be as powerful as the 120mm or 125mm guns of its counterparts, the rate of fire can partially compensate for this.

The XM1 is a prototype for the M1 Abrams, which would quickly become the ubiquitous American Main Battle Tank. The XM1 had superior armor to the M60 series and a more powerful turbine engine, enabling it to remain highly mobile in spite of its significant mass. Multiple XM1 prototypes were built; this specific version represents a model that was similar to the fully developed M1 Abrams. 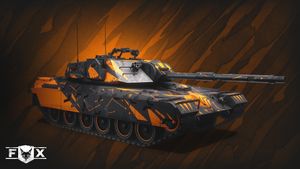 The XM1 FOX, a Premium variant that was purchasable from 28 September to 8 October 2017