Viktor Kirsanov is a standard commander available in Armored Warfare. He is available automatically to all players and can be purchased for 100,000 Credits

Viktor's skills are focused on boosting abilities after dealing damage or taking damage. These skills are suited for Main Battle Tanks and well armoured Tank Destroyers or Light Tanks. 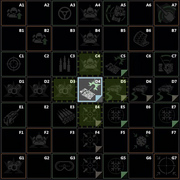 Viktor had a hard childhood in the northern forests of Russia. He enlisted in the army at an early age and quickly rose through the ranks, earning acknowledgement and praise for his combat acumen. He left the military after suffering injuries from an IED attack during a relief mission, but returned later as a contractor after realizing he missed military life.

These are the skills Viktor possessed before the commander skill rework in Patch 0.22. As such, they are currently obsolete and are not indicative of his current skills in the game at this time.