The VFM Mk. 5 is a tier 6 Premium Light Tank originating from the United Kingdom. It can be purchased from Marat Shishkin for 3,250 Gold. A second variant, the VFM Mk. 5 MERC, is occasionally available for purchase during sales.

A powerful, mobile platform, the VFM is an archetypal light tank capable of flanking with its high firepower gun and excellent mobility, causing enough havoc behind enemy lines to allow a large scale MBT push to break through while the enemy is disheveled. Its excellent gun handling and on-the-move accuracy allow it to hit targets from medium range and rapidly disengage, and its armor also allows for protection against smaller auto-cannon fire.

Designed by Great Britain, this light tank combines a US-built hull with a British turret, offering firepower in an affordable package. Created during the 1980s, the VFM5 was meant to usher in a new generation of British tanks for the export market. After development completed in 1987, it was unable to secure any orders and never went into production. 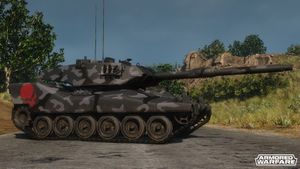 The VFM Mk. 5 MERC, a Premium variant that was purchasable starting November 2015