The VBL TOW is a tier 5 Armored Fighting Vehicle originating from France, and is sold by Sophie Wölfli. It can be unlocked from the XM800T LAW, and leads to the FV721 Fox.

Featuring excellent mobility and a potent ATGM launcher, the VBL TOW is an ATGM-only vehicle which functions as a long-range sniper. With excellent camouflage, a good view range, and excellent gun depression, the VBL TOW is tailor made for long range ridge poking and sniping, relying on its camo rating and mobility to make up for the fact that its armor is ineffective against many weapons.

Because of the VBL TOW’s reliance on firepower and mobility, upgrading to the BGM-71C TOW ATGM and M14 TCI Turbo-diesel Engine should be an early priority.

The French-built VBL, also known as the Panhard VBL, originally entered operation in 1990 and has had many variants built since. One of the export versions is the VBL TOW, equipped with a TOW tube that gives it significant anti-tank capabilities. It has a number of other technological upgrades, including enhanced radio equipment and a night sight system. 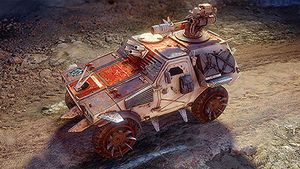