The T-90A is a tier 8 Main Battle Tank originating from Russia, and is sold by Marat Shishkin. It can be unlocked from the T-90, and unlocks a tier 9 Unlock Token, which can be used on the BMPT-72 Terminator 2, M8 Thunderbolt II, T-90MS, and FV4034 Challenger 2.

Featuring the devastating firepower characteristic of Russian MBTs, the T-90A is mobile, powerful, and deadly. With the highest damage potential of any tier 8 MBT, alongside excellent mobility in rough terrain, the T-90A is perfectly made for flanking and brawling. Attacking more armored MBTs from the side and rear is the specialty of the T-90A, which when used properly makes it one of the most dangerous vehicles on the battlefield.

Upgrading to the V-92S2F Diesel Engine will greatly improve the mobility of the T-90A, so this should be researched as early as possible to improve the flanking capability of the vehicle. Firepower upgrades such as ammunition and modules are important in the long run, but should not be focused early due to their high research cost relative to mobility and protection upgrades.

An upgrade to the T-90 platform, the T-90A features an improved turret, engine, and thermal sights. Created as an economic alternative to supporting two separate main battle tanks, the T-90 entered production in 1993, and a total of 307 units were produced exclusively for Russia, with 1,500 variants being built for the domestic and export markets. Entering service in the mid-1990’s, the T-90 has seen combat in Eastern Europe. Currently, Russia has ceased domestic orders in preparation of the Armata Universal Combat Platform. 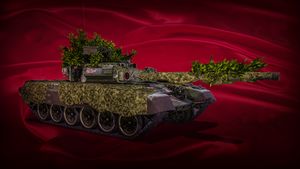