With excellent turret armor, the T-62 excels at firing from a hull down position. This comes with a caveat though: its poor gun depression does not allow for ridge poking, so its strong turret armor is negated by poor hull armor as it crests a ridge to fire. With a sluggish acceleration and top speed, it cannot easily charge between positions without leaving itself exposed, so caution should be taken any time it crosses open ground.

The Improved Fire Control System allows for a much quicker aim time, and the various ammunition upgrades give more firepower and penetration to the main gun, so these should be researched early. The engine upgrades only marginally improve the mobility of the vehicle, so should not take priority when upgrading.

Originally designed as an upgrade to the T-54/55 series of tanks, the T-62 was produced from 1961 until the 1980’s, with over 20,000 produced by a variety of nations. In service well over fifty years after its initial design, over a dozen smaller nations and forces currently field large fleets of the still capable workhorse of the Soviet Army. 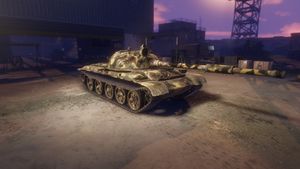 The T-62 Veteran, a Special variant that was originally given to players on Veterans Day 2015.