The Stingray 2 is a tier 7 Light Tank originating from the United States, and is sold by Marat Shishkin. It can be unlocked from the Stingray and leads to the M8 Buford.

An armored follow-up to the relatively light Stingray, the Stingray 2 is best utilized as a flanker and fire support vehicle that is best paired with an MBT. Using its mobility to flank and hit targets from behind, it can cause enough havoc behind the enemy lines to allow a large scale MBT push to break through while the enemy is disheveled. Its excellent gun handling and on-the-move accuracy allow it to hit a target from medium range and rapidly disengage. The main difference between this vehicle and its predecessor is the Appliqué package, which improves the frontal hull armor to near MBT levels of protection. However, this armor does not improve the turret, which remains vulnerable.

Upgrading to the 8V92TA-600 Diesel Engine will improve freedom of movement by increasing the acceleration and traverse speeds. The Improved Gun Stabilizer, Improved Thermal Sight, and Improved Ready Racks, along with the various ammunition upgrades, will increase the effective lethality of the Stingray 2. The Appliqué armor package allows for some frontal protection, but the vulnerable weak spot in the middle and relative lack of armor on the turret counter this, so it should not be a primary focus.

Created by the United States for the export market, this light tank was developed as an overall upgrade for the Stingray 1. Entering the market in 1996, the Stingray II continued the brand's tradition of offering capable tanks with low acquisition and maintenance costs. However, the vehicle was not able to garner enough interest and was eventually discontinued in 2012. 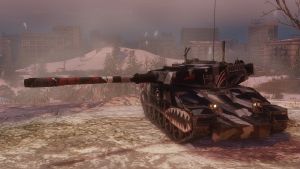 The Stingray 2 Shark, a Premium variant that was purchasable during October 2016 and April 2017