Rashid Al-Atassi is an unlockable commander available in Armored Warfare. He can be unlocked as an upgrade from the M551 Sheridan for 12,150 reputation points.

Rashid's skills are focused making your vehicle turn and reload faster, increasing damage per minute (DPM). These skills are best to enhance the abilities of Tank Destroyers and Light Tanks that already have a high DPM or to compensate for vehicles with slow reloads but high damage per shot such as Main Battle Tanks. His tier 2 skills only effect ATGMs, so he is best used on a vehicle that can equip them. 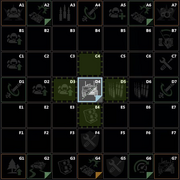 Growing up in war-torn Syria, Rashid quickly learned what it took to survive. When his family was killed, Rashid was forced to flee the country, and soon thereafter found himself in the Egyptian military, where his rough edges were finely polished. Although he always seems calm and projects confidence and courage, a dark desire for revenge fuels his tenacity in battle.

These are the skills Rashid possessed before the commander skill rework in Patch 0.22. As such, they are currently obsolete and are not indicative of his current skills in the game at this time.