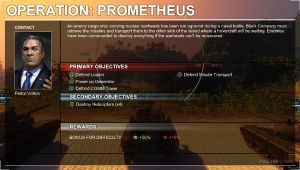 Operation: Prometheus is a PvE mission with both Takeover and Defense objective that takes place on a Lost Island map during daytime. It is given by the contact Fedor Volkov.

An Enemy cargo ship carrying nuclear warheads has been run aground during a naval battle. Black Company must retrieve the missiles and transport them to the other side of the island where a hover craft will be waiting. Enemies have been commanded to destroy everything if the warheads can't be re-secured. 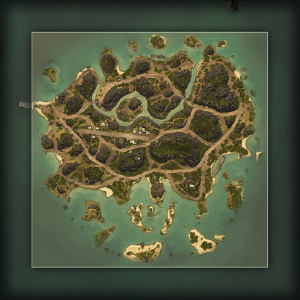 The biggest problem on this map can be a lack of armor, as there are always are enemys coming from all directions. Also keep in Mind that in the 2nd Phase you need to Cap the Generator AND defend the Cap at the Eastern side of the Runway.