Philipp Holzklau is a standard commander available in Armored Warfare. He is available automatically to all players.

Philipp's skills are focused on repair speed, crew survivability and improvements, mitigating the negative effects of injured crew members, and bolstering the hp of vehicle modules. These skills are suited primarily for Main Battle Tanks, which are usually slugging it out on the front lines, although the skills are general enough to be applied to most sturdy or front line vehicles effectively. 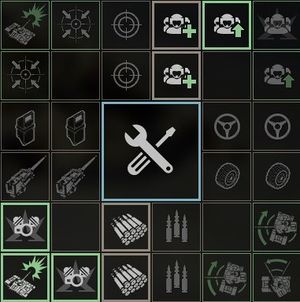 Maxed Out IV - Repair speed increased by 25% + 1% per commander level up to a total maximum of 40% faster repair speed.

This former artillery officer served with NATO forces in his youth, but was eventually dishonorably discharged for causing trouble off-base. Although he shows poor judgement in his personal life, he is steady and confident where it counts. Philip is irreverent and cocky, backing up his brazen attitude with positive results on the battlefield.

These are the skills Phillipp possessed before the commander skill rework in Patch 0.22. As such, they are currently obsolete and are not indicative of his current skills in the game at this time.