The M60A3 is a tier 5 Main Battle Tank originating from the United States, and is sold by Sophie Wölfli. It can be unlocked from the M60A1, and leads to the M1 Abrams.

With a well-designed turret and ample gun depression, the M60A3 serves as a viable ridge poker and hull down defender that can also brawl in a pinch. While its hull armor is mediocre at best and its mobility is lacking, it compensates for this with a relatively high rate of fire and good gun handling, along with ERA protection.

The first major upgrade that should be applied to the M60A3 is the RISE ERA package, which massively increases protection against HEAT ammunition, increasing survivability.  Another early upgrade should be the improved engine, to improve otherwise sluggish mobility. Upgrades to firepower should be considered next, to help remove enemies from the battlefield even faster.

This American designed main battle tank was created as part of a series of modernizations for the M60 Patton. Production commenced in 1978, and the M60A3 offered sizeable gains to offensive capabilities with the addition of improved targeting and thermal sights to aid combat in low visibility conditions. With an extensive service record, the vehicle has primarily seen combat in Western Asia. Even though the United States retired the M60A3 in 2005, it is still in use today with many operators. 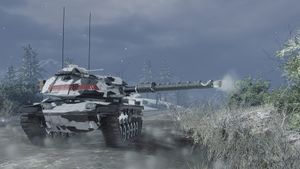 The M60A3 ICE, a Premium variant that was purchasable during December 2015