The M60A2 Starship is a tier 5 Main Battle Tank originating from the United States. It is sold by Sophie Wölfli and can be unlocked from the M60A1 as a side branch of the main American MBT tree.

With a powerful 152mm cannon unmatched in raw power among the T5 MBTs, the Starship fulfills the role of high powered attacker and capable defender. However, with the high damage comes a very long reload. Therefore, it is best for the M60A2 to travel with friendly tanks, as its high reload leaves it exposed if no allies are covering.

Since the M60A2 is all about firepower, research should focus on upgrading the already impressive gun. The Improved Rangefinder will increase gun accuracy, and the MGM-51A "Shillelagh" ATGM is a strong alternative to the standard HEAT ammunition. 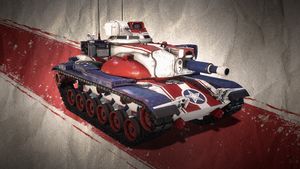 Developed by the United States as a force multiplier for the M60A1, this main battle tank utilizes cannons capable of firing conventional rounds as well as antitank guided missiles. Due to its advanced technology, it was given the moniker "Starship". The M60A2 was used in active service between 1972 and 1982, with 526 units constructed. When the vehicle was retired, many were upgraded to the M60A3.