The M1128 MGS is a tier 8 Tank Destroyer originating from the United States, and is sold by Sophie Wölfli. It can be unlocked from the B1 Centauro 105, and unlocks a tier 9 Unlock Token, which can be used on the CRAB, B1 Draco, B1 Centauro 120, Leopard 2A6, or M1A2 Abrams SEP v.3.

Possessing heavy and accurate firepower with high fire rate on a light, nimble frame, the M1128 MGS "Stryker" is a powerful long-range killer. One of the faster vehicles in Armored Warfare, it is capable of rapidly relocating when in danger. It must use this mobility to survive, as its armor only protects against light autocannon fire at best.

As a platform designed around firepower and mobility, the upgrades researched should reflect this. Upgrading to the Improved Gunner Sight, Improved Autoloader, and various ammunition upgrades will offer a much more varied arsenal. Upgrading to the Caterpillar 3412 Diesel Engine boost the already stellar mobility. An upgrade which can vary in importance to each player is the M68A1E4 Mk. II cannon, which provides a magazine of nine shots which can be individually fired at a faster rate, but with a longer 11 second reload for the entire magazine.

Designed by the United States, this armored fighting vehicle was created as a domestic alternative to the Canadian-built LAV III. Developed with the prediction that the future of combat would be of lower intensity than previous generations, the M1128 Stryker MGS entered service with the US Army in 2007 with 142 units. Presently, production has been placed on hiatus while the vehicle is being reviewed as an air-droppable candidate for the Airborne Division. With a short service history, the vehicle has only seen combat in Western Asia. 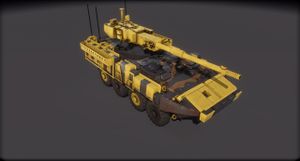