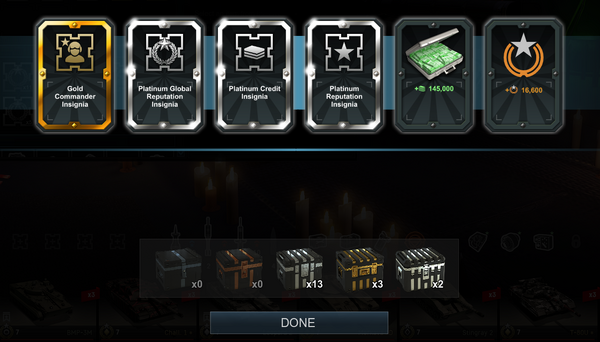 An example photo of the items that can be obtained from Supply Crates.

The Loot System was added in Update 0.16 in the form of Supply Crates, which are collected from either daily challenges or through exemplary performance during a battle. Each Supply Crate drops a certain selection of items, including boosters, Credits, Global Reputation, and Premium Time.

Supply Crates are currently available in three different rarities, from the more common Silver Crates, to Gold and Platinum Crates. Each crate is obtained once a certain threshold in reputation earned is passed.

Each type of crate has a specific list of possible items to be obtained.

Insignias are one time use booster that allow you to increase your rewards for a battle. Insignias are applied to individual vehicles just like Consumables, and each vehicle can have five Insignias applied, each of which offers a boost to a specific reward type; Credits, Reputation, Global Reputation, Commander XP, and Crew XP. After the battle is over and the Insignia's effect is calculated, the Insignia is used up and must be replaced.

Boosts act much the same way as Insignias, increasing the rewards you get in a battle, with the main difference being that Boosts last for twelve hours before expiring. You can only use up to one boost at a time for free, with the ability to activate a second boost for a small amount of Gold. Unlike Insignias, boosts are not limited to just the vehicle you put them on, and can also have multiple areas that they boost. An example of this is the Gold Intel Boost, which gives a bonus to both credits and reputation earned.