The Kornet-EM is a tier 10 armored fighting vehicle originating from Russia, and is sold by Oscar Faraday. It can be unlocked from the Sprut-SD, and is one of the end of the Oscar Faraday line.

Russia's Kornet-EM ATGM was first produced in 2012 and shown to the public at the DEFEXPO-2012 exhibition. Over 28 have been produced. Several vehicles have taken part in parades and a batch of Kornet-EMs was sold to Algeria. 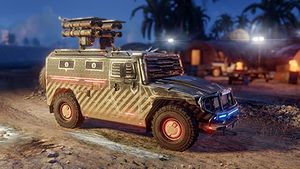