Juan Carlos Miramón is an unlockable commander available in Armored Warfare. He can be unlocked as an upgrade from the Gvosdika and Swingfire for 12,150 reputation points.

Juan's skills are focused on making vehicles aim, fire and reload quicker. These skills are suited for Self-Propelled Guns and Main Battle Tanks with slow reloads and/or aim times. 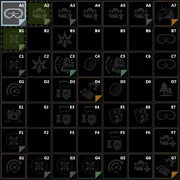 Instigator IV - Vision range increased by 20.8 meters (+0.8 meter up to 32 meters maximum), if no friendly vehicles are within 25 meters

As a teen and against his will, Juan served the Mexican Drug Cartels. He had and aptitude with machines, improvising armored vehicles and weaponry. Juan escaped to the US and was quickly employed by a PMC, soon discovering his talent for command. With his intimate knowledge of his vehicles, he is rarely stranded in battle.

These are the skills Juan possessed before the commander skill rework in Patch 0.22. As such, they are currently obsolete and are not indicative of his current skills in the game at this time.