The IS-7 is a tier 3 Main Battle Tank originating from the Soviet Union. It was offered for the first anniversary of Armored Warfare Open Beta as a giveaway tank for players who played at least five battles between 8 - 15 October 2016. It has also been offered in various deals since the anniversary.

The IS-7 is a main battle tank that was first developed by the Soviet Union in 1948. It is the largest and heaviest vehicle in the IS family. Only three were built for the 1946 prototype, although there was also a 1948 variant. This vehicle never reached production for reasons unknown, although it is suspected that it may have had too much mass to be practical. 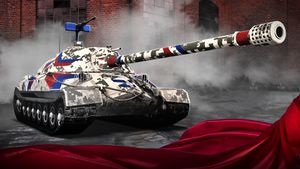