Operation: Frostbite is a Defense PvE mission that takes place on Roughneck map during daytime. It is given by the contact Petre Sabri. The enemy is not mentioned by name in this mission.

A blizzard has knocked out communications with HQ. Get to the satellite stations to restore communications for the oil refinery and reconnect with HQ for further orders. 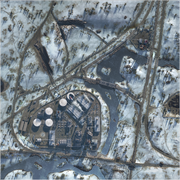 This mission features multiple secondary objectives that are revealed one by one:

This mission can be hard, but if played smartly, be won rather easy. After Capturing the first Objective, if the next is to defend the Eastern Oil Derricks, 2 or 3 members of the playerspeed shoud head there as soon as possible, because the AI can rush this cap, and if you have slower tanks, cap before you can arrive.