Freya Højbjerg is an unlockable commander available in Armored Warfare. She can be unlocked as an upgrade from the M109 and BMD-1 for 12,150 reputation points.

Freya's skills are focused on making vehicles aim, fire and reload quicker. These skills are suited for Self-Propelled Guns and Main Battle Tanks with slow reloads and/or aim times. 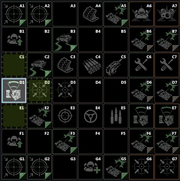 Originally a UN Peacekeeper, Freja was forced to find creative and indirect solutions for the security issues she faced. Longing for a job with a more direct impact on people's lives, she left to join a PMC. There she found power within the confines of the cockpit, using unexpected tactics to harass her enemies

These are the skills Freya possessed before the commander skill rework in Patch 0.22. As such, they are currently obsolete and are not indicative of his current skills in the game at this time.