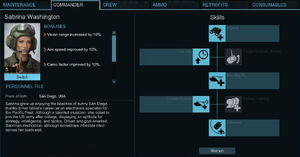 Commanders are a separate fighting unit, forming part of the vehicle's crew and acting as a key element of any team. In contrast to regular crew members, the commander can switch from vehicle to vehicle and will have their own unique system of development. Each commander is a completely formed character with their own biography, history, portrait and personality traits. Each player gets three commanders at the start of the game. Commanders can be recruited with game currency, unlocked as part of a vehicle's proven status upgrades, earned during events or as part of a package, such as with the Founders Packs. As of now there are ten commanders in the game. Anthony Diaz, Fyodor Sokolov (who is the version of Anthony Diaz that was for Russian players only), and Maximilian Koenig, are no longer available to players who did not unlock them when they were available as part of special events or purchase a package.

Players will improve a commander's characteristics independently. As battle experience increases, the commander will increase their level, allowing the player to select various skills for them that will impact their vehicle performance. Commanders do not share any skills with crew and they have their own unique ones. For example, a commander cannot learn Shoot From the Hip, nor will leveling up a commander grant them other bonuses such as faster vehicle acceleration (which belongs to drivers). Commanders only impact the vehicle through their skills. These skills vary greatly, from increasing crew efficiency, greater view range, faster reload times, or even increasing the damage you cause with engine fires. Commanders also have various skills that activate only under certain situations, buffing your vehicle, such as increasing module damage dealt when near allies.

Commanders will have several skills available from which a player can choose. A typical commander has 7 skills, split into 5 Tiers. As such, a commander can be leveled up a maximum of five times (thus far). Each time your commander levels up, they can choose a skill from the appropriate tier. Where there are two skills to choose from, you can only choose one. Doing so will lock the other skill off.