The Challenger 2 ATDU is a Tier 10 Main Battle Tank originating from the United Kingdom, and is sold by Marat Shishkin. It can be unlocked with a tier 10 Unlock Token, and is the end of the Western European MBT tree.

The most heavily armed and armored tank in the game, with nearly impenetrable frontal armor, one of the largest health pool in the game, and a devastating 140mm cannon, the ATDU is most capable of leading an attack through fire. While slower than most other vehicles, it is by no means sluggish, and can equally push a flank or spearhead a charge.

Unlocking and buying the Spall liner is a quick way to effectively increase its already large health pool. Firepower upgrades, while expensive on reputation, give a large bonus to the damage per shot, and the 140mm Prototype PISH ammunition can devastate lightly armored enemies.

The Challenger 2 Armoured Trials and Development Unit is the ultimate evolution of the Challenger 2 design. Based on a test-bed Challenger 2 vehicle commonly known as Megatron, the ATDU model features several upgrades to the original design that were proposed or trialed, including armor improvements, an Explosive Reactive Armor kit, and the implementation of a 140mm prototype cannon. 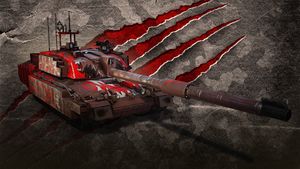