The FV4030/4 Challenger 1 is a tier 7 Main Battle Tank originating from the United Kingdom, and is sold by Marat Shishkin. It can be unlocked from the FV4201 Chieftain 900 and leads to the Al-Hussein Hybrid.

With the strongest base hull armor of the tier 7 MBTs, and a very substantial health pool, the Challenger 1 is right at home pushing a front against dug in enemies. With excellent accuracy and depression, its gun allows for accurate shots on the move against enemy targets. While well armored, this vehicle is not perfect, with a low top speed and the worst upgraded acceleration of its tier. If caught in the open, it can easily find itself exposed (better the Challenger then other MBTs at tier 7 due to the impressive armor), as it lacks the speed to rapidly retreat from a position. Use the challenger as a spearhead of a charge, your frontal armour with the appliqué armour package is incredible for the tier (being able to reliably bounce shots from tier 8 and 9’s), your sides are also very strong and immune to most the APC’s you will meet. However, the challenger is lacking in both the firepower and mobility department when compared to other MBT’s of the tier having thoroughly average alpha damage as well as a sluggish acceleration

Developed by the United Kingdom, this main battle tank served as a successor to the Chieftain line of vehicles. Development of the Challenger 1 began in the late 1970’s with a request for improvements to the offensive and defensive capabilities of the Chieftain Mk. 5. Originally called the "Cheviot", the vehicle was re-branded with the name of a tank from the Second World War. A total of 420 units were produced, primarily seeing combat in Western Asia. Phased out by the upgraded Challenger 2 in the British Army, the Challenger 1 remains in service in the Jordanian Army under the name Al-Hussein. 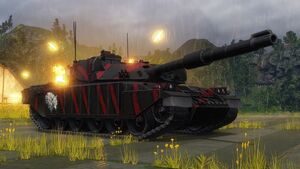 The FV4030/4 Challenger 1 WOLF, a Premium variant that was purchasable during March 2016 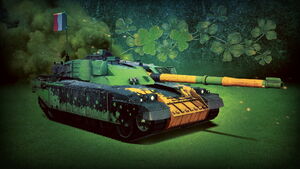