The B1 Centauro 120 is a tier 9 Tank Destroyer originating from Italy, and is sold by Sophie Wölfli. It can be unlocked with a tier 9 Unlock Token, and unlocks a tier 10 Unlock Token, which can be used on the SPHINX, Leopard 2AX, or XM1A3.

Featuring heavy, rapid firepower on a light nimble frame, the B1 Centauro 120 is a powerful long-range killer capable of highly accurate fire beyond the range of return fire. It is one of the faster vehicles in the game, capable of rapidly relocating when in danger. It must use this mobility to survive, as its armor only protects against light autocannon fire at best.

As a platform designed around firepower and mobility, the upgrades researched should reflect this. Upgrading to the Improved Gunner Sight, Improved Stowage, and various ammunition upgrades will offer a much more varied arsenal, and upgrading to the Iveco V6M TCA Diesel Engine will boost the already stellar mobility.

Developed by Italy, this tank destroyer serves as a firepower upgrade to the B1 Centauro. The major change implemented for the B1 Centauro 120 is the addition of a 120mm/L45 cannon, which is mounted on an improved turret, giving it a tactical edge in combat. Exclusive to the Sultanate of Oman, the vehicle entered service in 2009. 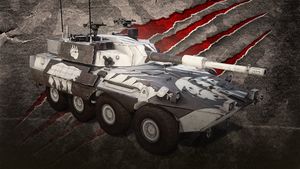