The Begleitpanzer 57 is a tier 5 Light Tank originating from Germany, and is sold by Marat Shishkin. It can be unlocked from the M551 Sheridan as a side branch of the main LT tree.

Lightly armored but heavily armed, the Begleitpanzer 57 (colloquially known as the Bagel or Buglight) is a highly mobile platform which fires both a 57mm autocannon and a side mounted ATGM. Speed and maneuverability allow it to flank heavily armored targets and tear them to shreds with stunning close-range firepower. At range, the Begleitpanzer's ATGM can be used on exposed targets for hit and run tactics, using the vehicle's natural camo values to stay hidden from enemy targets.

Powerful even without upgrades, adding more effective armaments such as the BGM-71B TOW and 57mm Mk.2 APFSDS will increase effective damage output even higher. Upgrading to the Liebherr 750 hp Diesel Engine will also allow for more effective flanking and maneuvering.

Created by Germany, this light tank prototype was built as a private venture to represent an under-served category of combat vehicles. Based off the chassis of the Marder, development of the Begleitpanzer started in the mid-1970’s, with the vehicle being unveiled to the world in 1977. Unfortunately, the vehicle was unable to attract any buyers and never went into production. A notable feature of the vehicle was that it could carry a small scouting party, which effectively doubled the total crew of the vehicle by utilizing the scouts to assist with reloading. 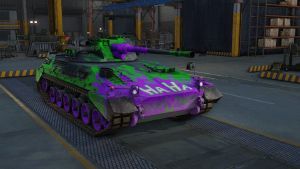 The Begleitpanzer 57 Joker, a Premium variant that was purchasable during June 2017