The BMD-4 is a tier 6 Armored Fighting Vehicle‏‎ originating from Russia, and is sold by Marat Shishkin. It can be unlocked from the BMD-2 and leads to the BMD-2M.

Continuing the BMD tradition of high firepower on a light frame, the BMD-4 improves on these qualities, with some added benefits. Faster than most other BMD models thanks to an improved engine, and having a versatile 30mm/100mm combination, the BMD-4 remains a mobile flanker, capable of dealing significant damage to the sides and rears of unsuspecting vehicles.

Upgrading to the UTD-29 Diesel Engine will heavily improve the acceleration of the BMD-4, allowing for easier flanking maneuvers. The Improved Fire Control System, Improved Thermal Sights, and Improved Autoloader will heavily increase effective firepower, so should be researched early. 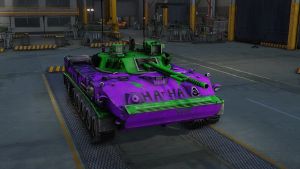 The BMD-4 Joker, a Premium variant that was purchasable during June 2017

Developed by Russia, this infantry fighting vehicle was devised as a lightweight update to the BMD-3 for the Airborne Division. Entering service in 2004, the BMD-4’s Bakhcha-U turret offers a dramatic increase in firepower over its predecessor. It is considered one of the mostly heavily armed vehicles in its class. Presently, Russia is the only operator of the BMD-4, but other countries have expressed interest in the vehicle.