Active Protection Systems, or APS, are an upgrade that can be installed on high tier vehicles in Armored Warfare. These systems are designed to protect the vehicle from incoming missiles by either diverting them away or destroying them completely.

There are two types of APS in Armored Warfare; Hard Kill and Soft Kill Systems.

Soft kill systems on the other hand, are designed to divert or distract the missile away from its actual target. These countermeasures are more varied than hard kill systems, but typically include some form of jamming or interfering with the signal which is guiding the missile to its target. 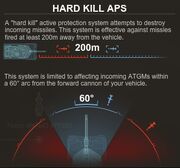 An example of an APS system as shown within the game.

As in real life, APS systems in Armored Warfare cannot activate within a certain range. This simulates the time needed for the APS system to activate, locate, and calculate how best to defend against an incoming target. The activation range varies depending on the vehicle, but can be seen by scrolling over the APS in the upgrades window. This can be seen in the example as being 200 meters.

Due to the APS being mounted in a fixed position, it is only effective within a certain arc from the front of the turret. The frontal arc again varies depending on the vehicle, but can be seen by scrolling over the APS in the upgrades window. The example to the right shows a frontal arc of sixty degrees, or thirty degrees to each side of the vehicles primary weapon.

In order to simulate the progression of technology as missiles and APS systems are upgraded to counter one another, Soft Kill APS systems have a percentage chance of failure, which increases if the vehicle firing at the player is a higher tier than the player. The change also decreases the lower the tier the opposing vehicle is. The base effectiveness of most Soft Kill APS systems is 50%, and changes by 25% depending on whether the vehicle in question is a tier higher or lower. This can be seen in the APS information card in game, which is located in the upgrades section of the vehicle.