The AMX-10RCR is a tier 8 Premium Tank Destroyer originating from France. It can be purchased from Francine De Laroche for 9,000 Gold. It was originally sold with a unique skin (Named the AMX-10RCR Liberté) during the Independence Day event, and was also a prize as part of the Freedom Fight event. Soon after, the non-skinned version was added to Zhang Feng as a standard premium vehicle, then moved to Francine De Laroche since 0.28.

The RCR is unique in a few ways compared to similar wheeled Tank Destroyers. First, the AMX is the only wheeled vehicle capable of rotating without driving forwards or backwards, due to each side having independent wheel control. This allows it more maneuverability than vehicles forced to make wide turns instead. Another major difference is the two-shot magazine that can empty in one second at a target before reloading. These two characteristics allow the RCR to shine as a hit and run fighter.

A successor to the AMC-10RC, the AMX-10RCR light reconnaissance vehicle includes a number of upgrades. The program for fully modernizing this French vehicle, which was completed in 2010, included integrating various systems and additional armor; changes from the RC to the RCR included improvements in protection, suspension and communications systems. 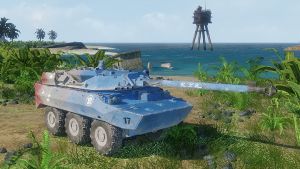 The AMX-10RCR Liberté, a Premium variant that was purchasable during July 2016